As many of you already know, version 2 RTW of Web Platform Installer released in September. So what’s new in this version since RC that was released in March? First of all, Web PI now caches downloaded installers. Second of all, Web PI now supports 9 additional languages – German, French, Spanish, Russian, Italian, Japanese, Korean, Traditional and Simplified Chinese. This language support extends to both displaying Web PI UI in the language of the current OS locale and installing a product (if available) in the language specified by the user. Finally, the last biggest feature of RTW is extensibility.

Some of these features are rather too big to include them in one article and are described separately through the links provided in each title. Thus, this article will cover only the remaining features surfaced through the Options dialog 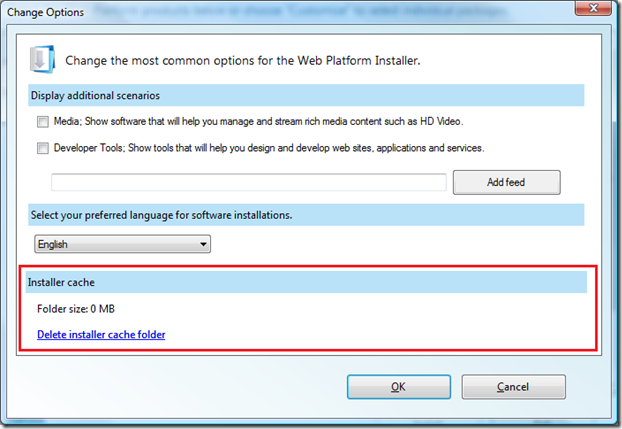 If installation fails, you can always run the cached installer that is likely to have a UI that might surface the errors better. Also, if you want to install the same set of products on a different machine, you can just copy the installer cache folder to that machine to the same location and Web PI will pick it up. No worries if an installer gets updated for a product, since Web PI will compare the time stamps and download the newer file when you request to install the product again. The size of the cache is always shown in the dialog. If it gets too big or you don’t find it useful anymore (everything installs fine), you can clear the cache by clicking on “Delete installer cache folder” hyperlink.

From the command line you can launch Web PI with a /reset switch that will restore your options to the default state:

Enjoy the new set of features in Web Platform Installer and please provide your feedback to help us make the product serve your needs better!