Today we announce the general availability of the Windows Cache Extension for PHP 1.0 (affectionately known as “WinCache”), which is an open source built-for-Windows caching extension to the PHP engine. You can view, contribute and download the source code for WinCache at the PHP repository for extensions (http://pecl.php.net/package/WinCache), where we have joined other Linux-based PHP caches. 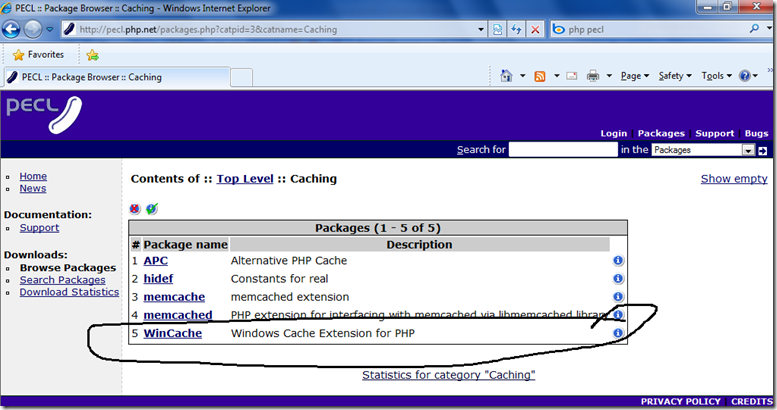 I wanted to thank Pierre Joye for his invaluable help in helping connect the IIS product team with PECL, and for agreeing to host the WinCache binaries on http://windows.php.net.

We cordially invite the PHP development community to join us in development of this caching extension for PHP on Windows. We already have gotten one contribution from the community in our pre-release mode and are very excited to have others join this new PHP on Windows caching community. The IIS team at Microsoft is going to start off the v2.0 development by adding a user cache and lazy class loading to the opcode cache, file cache, and relative file cache that is available today in WinCache 1.0.

I am proud of the WinCache project for many reasons, including:

Here’s some more information about WinCache.

WinCache is actually a collection of three caches:

WinCache itself was designed, written, and tested by the IIS engineering team that also brings you FastCGI, the core PHP hosting platform in IIS. We are planning to add more caches to WinCache in 2010.

What is the WinCache license?

How do I get WinCache?

You can compile WinCache as part of your PHP compilation from the PECL library.

If you download any PHP application from Web Platform Installer and/or the Windows Web Application Gallery (WordPress, Moodle, SilverStripe, SugarCRM, Acquia Drupal, Gallery 2, and any other new PHP app in the Web App Gallery), you will automatically get WinCache installed on your IIS computer as part of the PHP application install. We want to make sure that your PHP application deployment and hosting experience is great on Windows.

How do I learn more about WinCache?

How much faster is it to run WinCache with my PHP application?

We are seeing quite a significant increase in performance. But don’t take our word for it. Check out the perspective of other members of the PHP developer community:

We hope that others try WinCache and publish their findings as well.

Why is Microsoft investing in making PHP run faster?

IIS is all about making apps run at their finest on IIS. We have a built-in advantage with ASP.NET apps because we can walk down the hallway in our building here in the Seattle area to talk to the ASP.NET team about how to make the ASP.NET on IIS experience better. But we also care deeply about the PHP experience on IIS – there are some amazing applications like WordPress and Drupal that form the foundation of many a Web site on the Internet. We are committed to making those applications run great on Windows, which is the primary motivation for our WinCache project.

How do I learn more about WinCache?

To learn more about WinCache, you can check out: